For media requests, speaking engagements and all other inquiries, please contact us at delaythedisease@ohiohealth.com.

Delay the Disease founders David Zid and Jackie Russell are passionate about the fact that Parkinson’s disease can be managed with daily exercise, putting you back in control. Their belief in hope and inspiration for the Parkinson’s community is a testimonial to their mission to provide this important tool of exercise.

David Zid is a graduate of The Ohio State University and has been a professional fitness instructor in Columbus, Ohio, since 1997. Certified through the American Council on Exercise (ACE) and Absolute Performance Group (APG) as a personal trainer and functional fitness trainer respectively, he is the owner and president of Total Health Works, a personal training company that he started in 1999.

As a result of his own interest in fitness for older adults, David developed exercise programs specifically for people who have Parkinson’s disease. Since publishing this book in 2007, he has made it his mission to make life better for people with Parkinson’s.

David shares his expertise and observations with physicians, physical therapists and fitness professionals throughout the country, who are involved in the treatment of Parkinson’s. He also donates his time to the Columbus Parkinson’s Community. His clients and class participants are living proof that, with the right attitude and exercise program, it is possible to “delay the disease.”

In his free time, David loves hanging out with his family and friends, and exercising — of course! 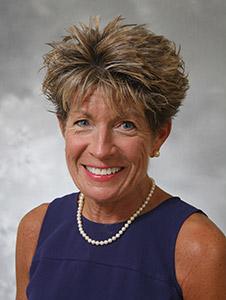 Jackie Russell is a graduate of The Ohio State University, holding a Bachelor of Science in nursing. Credentialed with professional achievement in perioperative nursing (CNOR) and ACLS certified, she has been employed in a variety of nursing specialties including neurosurgery and critical care cardiology. She is presently surgical nursing supervisor for Michael McShane, MD, at Orthopedic One in Columbus, Ohio.

In 2005, she collaborated with David Zid, and together they created a wellness program for people with Parkinson’s that includes community exercise classes, two books and corresponding DVDs, evidenced-based professional education, CarePartner seminars and research studies. As the co-founder and program development coordinator for OhioHealth Delay the Disease™, Jackie has been a featured speaker at many Parkinson’s symposia, live webinars and community events all over the country.

She is an author on the peer review study published in Parkinsonism and Related Disorders (2014) entitled “Effects of a Formal Exercise Program on Parkinson’s Disease: A Pilot Study Using a Delayed Start Design.” Her programmatic support of their classes has encouraged outcome measure / data collection from participants all over the country, proving that participation in OhioHealth Delay the Disease improves functional mobility and quality of life and fights depression. Jackie delivers a message of hope to all people with Parkinson’s disease.

Participants have observed improvement in posture, balance, handwriting, mobility, speech volume and a gained sense of independence. Participants have also reported being able to decrease the number and dosage of medications with the addition of this daily exercise program.

Slows the Progression of the Disease

“My doctor told me I had Parkinson’s disease seven years ago — he predicted I had about three more years of mobility and good quality of life. I was desperate to stop PD in its tracks! Thanks to early adoption of the OhioHealth Delay the Disease exercise program, I walk, hop, skip, run, jump and play as well as I did seven years ago, dramatically slowing down the progression of PD symptoms! Overall, I’m in the best shape of my life…PD is totally manageable!” – Elisa E.

“The OhioHealth Delay the Disease Program has not only vastly changed my perspective on life with Parkinson’s disease (energizing and revitalizing me) but also has, in my opinion, significantly slowed the rate of progression of my symptoms. Delay the Disease has given me a method to fight this battle and to win.” – John B.

“I feel better, and more flexible than before I started regular exercise. David’s class is great because it targets certain needs of the PD patient. This class gives me the feeling that I am taking control of my illness and actually doing something to help myself. Lastly, the class provides a pleasant experience of camaraderie with other PD patients.” ~ MW, class participant

“The most difficult but also the most important thing I did after finding out I had Parkinson’s was accepting my diagnosis and educating myself about treatment options. The first class I attended was so inspiring. I sat there watching these people, who were going through a similar experience as me, do things that I thought were a part of my past life.”  Brenda, class participant

“It might be overly dramatic to say exercise saved my life, but it certainly saved my quality of life. I can sit and stand with ease now, my posture is straight and my small voice has been replaced with a stronger one. My arm swing is returning, I no longer shuffle. The biggest change is my mental outlook. My demeanor has improved so much that my overall reaction to this affliction has become almost dismissive. Overall, I feel as good or better than my pre-afflicted self.” ~ KC, class participant

“Since I started this exercise class, I have noticed an increased endurance in all my daily activities. My husband and I both notice an improvement in my gait. Even though some of my symptoms are better because of medication, I really believe that exercise has helped the most. Thank you David.” ~ AT, class participant

“The obvious physical benefits to me are greater flexibility, maintenance of muscle strength and less rigidity. My mental focus and concentration have also improved. The secondary benefit that is equally important, in my opinion, is socializing with other PD patients and making new friends. I feel more comfortable exercising with folks ‘in the same boat’ who understand personal limitations.” ~ DJ, class participant

"Getting in and out of the car is easier, and I am able to slide away from a table at a restaurant without stumbling." ~ Class participant

"I noticed some improvement in the way I walk and maintain my balance. I now take bigger steps and no longer seem to shuffle or limp." ~ Class participant